Donating a Memory: The Desk of Hardie Gramatky

A favorite pen, a childhood blanket, an old chair—there are some objects we use so frequently in our lives that they become more than merely objects. They bear our fingerprints and our impressions. They become curators of our most cherished memories, and we can’t bear to part with them, no matter their condition or age.

For Linda Gramatky Smith, her father’s desk, marred with grooves from the pressure of cutting mats and stains from watercolor paint, is just such an object. Her father was Hardie Gramatky, master watercolorist and author and illustrator of the children’s classic and bestseller Little Toot series, and it was from that desk that he created characters and filled them with emotions he drew from his own experiences. She remembers how the desk and her father’s studio were a central part of their home growing up. While emulating him on the studio floor with her own watercolors at age six, she recalls him saying to her, “How did you make that color?” as she had created just the shade he was looking for. “He didn’t keep the door closed or hide himself away while he painted,” she said. “I loved being close to him while he was working.” Dorothea and Hardie Gramatky with Linda

Last August, as she and her husband, Kendall, planned a move to a retirement community closer to their daughter, Smith woke up in the middle of the night, frantic and thinking, “What about Dad’s desk?” It made her heartsick to know that it wouldn’t fit in their new home. “I wanted the desk to go to a place where it would be loved in the same way,” she said. The next morning, she called Ben Sapp, director of the Mazza Museum at the University of Findlay, who told her he’d be delighted to make a home for the desk at the Museum.

Smith first had the opportunity to visit Mazza with her mother and husband in 1991. In a true labor of love, she and her mother Dorothea Gramatky, also a published artist, finished Little Toot and the Loch Ness Monster after Gramatky’s death, and the pair spoke to the Museum audience about the book as well as Gramatky and his process as an artist. “It was a great experience to come and speak at Mazza at a time when it had really just begun to become what it is today,” she said.

Not long after that, Jerry Mallett, who founded the Museum in 1982, contacted Smith about stopping by her home in Westport, Connecticut with a number of fans of the collection as part of a studio tour. She and Ken gave guests a look behind the scenes including a room set up like her father’s studio complete with desk, taboret (art supply cabinet) and a self-portrait. The desk and studio so impressed Mallet and those on the tour that it gave him an idea. Working with Smith, he and his team developed a replica of the desk that could be displayed in the Museum with a “window” or frame that included a picture of New York Harbor as her father had seen it from his Pearl Street studio window.

The exhibit was a hit. Current director Ben Sapp remembers kids asking him over the years, “Did Hardie Gramatky actually touch this desk?” With Smith’s recent donation, he’ll be able to answer that question with a resounding, “Yes!”

As she and her husband packed for their move, Smith struggled to find a way to transport the desk from their home in Connecticut to Ohio. With the assistance of University Trustee Sherri Garner Brumbaugh, Sapp was able to assist her again. As president of Garner Trucking Inc., Brumbaugh provided access to a truck and driver that would be in the area and could pick up the desk and deliver it to the Museum. “It was an honor and pleasure to help the Mazza Museum by providing trucking services to safely move such valued cargo,” said Brumbaugh. “I know the treasured artifacts will provide another connection to the arts for people in our community, young and old.” 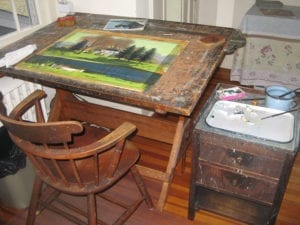 Sapp plans to use the desk along with the taboret and self-portrait to create a new artist-in-residence studio. “The studio will allow artists visiting the museum to continue their work as they lead workshops or give presentations, and it will honor and display Gramatky’s artwork,” said Sapp. With the support of an endowment funded through the Findlay-Hancock Community Foundation, Sapp said the Museum has been able to purchase much of Gramatky’s life’s work for the collection.

“His work has hung in many different places. This is different,” said Smith. “Mazza is honoring him for who he was as a person and an artist. It’s not about just one book or just one painting. It’s an evolving exhibit that will show his work in different ways.”

When he spoke to children about his books, Smith said, “He never came across as an expert. He wanted to inspire their creativity. He would ask them ‘What are you going to put in your drawing?’ It was like he was having an intimate, one-on-one conversation with each one. He loved to inspire kids to create their own pictures and stories and would have enjoyed seeing his work go on to inspire people at Mazza.” His life’s work includes journals he wrote as he crafted his books. Through them, Smith says, people can come to understand how her father drew from his own experiences when he wrote. For example, he wrote notes about what it felt like to be a scared kid with an overactive imagination and how he intended to apply those emotions to how Little Toot or other characters felt in his stories. She sees giving his desk to the Museum as another measure in keeping his spirit alive. “People who loved Little Toot will come to Mazza, and he will live on there. It’s truly exciting for someone who loved her father so much,” she said.